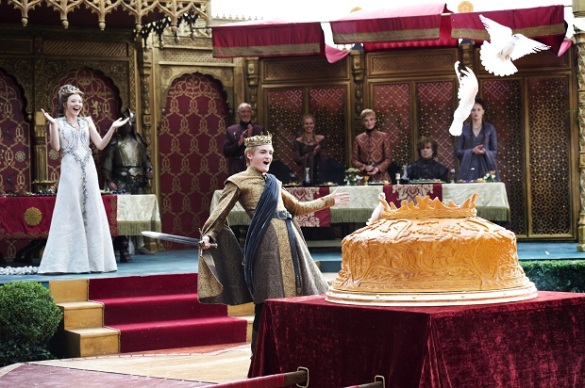 I am sure Joffrey would like us to remember him as the crazy child-king that he was, rather than that bloated purple mess that he turned into at the end of this week’s Game of Thrones episode.  Thus, I have chosen the picture above so that we can remember the horrible man-child (that believed he was untouchable) just the way he was–an idiot.  Ned’s death was spoiled for me before I saw it in season 1 and I wasn’t necessarily surprised by the end of Robb Stark and his mother (or I wasn’t as depressed by such events as a lot of people).  But, Joffrey getting killed, shocked the heck out of me!  I was not expecting it at all (please keep in mind that neither CJ or I have read the books).  So, let’s get to talking about what happened to the little purple people-eater.

1.  The purple wedding – Joffrey’s and Margaery’s wedding is referred to as the purple wedding.  I initially thought this was because purple is considered the color of royalty, so it seemed natural that the wedding of the king would be called “the purple wedding.”  But, now I am wondering if it is called that because Joffrey literally turned purple as he choked to death.  Anyone have any idea?  I would post the picture of his bloated purple face, but it gives me nightmares.

2.  I kinda feel bad – Before this week’s episode started I tweeted something about how Joffrey liked to drown puppies to calm his pre-wedding nerves.  It seemed appropriate given the psychopath that he was.  And, he was in rare form both before and during his wedding.  I mean, he was really acting like an a-hole.  But, in the aftermath of his death, I felt a little bad about my tweet.  I mean, I wasn’t expecting him to die!  So, as I sat there in shock after we watched Joffrey choke to death, I considered erasing my tweet (out of respect for the dead, of course, and because as Joffrey lay there dead in his mother’s arms, he definitely appeared more child-like than normal).  However, then I remembered what a lying piece of sh*t Joffrey was and got over any sadness I felt for his passing.  Don’t rest in peace Joffrey, you were a bad, bad man and the people of Westeros can sleep a little easier tonight knowing you are gone.*

*Part of my sadness may be due to the fact that Jack Gleeson claims to be done with acting for good.

3.  Tyrion didn’t do it – If Tyrion is one thing in particular, he is smart.  So, there is no way that I believe that he is responsible for the poisoning of Joffrey; he wouldn’t be so stupid as to be the one caught holding the last thing that Joffrey touched before Joffrey died.**  This means it was someone else.  But, who?

(A lot more people surely wanted Joffrey dead, but in my mind, these are the most likely candidates of the moment.)

**Cersei isn’t dumb, but she also hates her little brother so much that she may actually believe that Tyrion is responsible.  Both Tywin’s and Jaime’s expressions at the end of the episode lead me to think that they might believe Cersei as well.  Plus, I know that Tyrion spends some time in prison this season, so it seems logically that this would be the reason why.  I hope someone comes to Tyrion’s rescue though.

***If you want a visual breakdown of how Olenna could have killed Joffrey, here you go: http://imgur.com/a/Hjii3

4.  Who becomes King now? Joffrey’s younger brother? Is he next in line for the throne?

5.  The non-purple wedding stuff – In other news, Ramsay Snow is still a horrible horrible person.  He might be next on my list of GoT people I would like to die.  Watching him chase that poor girl through the forest was so uncomfortable; I couldn’t handle it.  I am also not happy about the fact that he knows the Stark boys are still alive.  Bran is at least north of the wall, which means he is hopefully out of the reach of Ramsay Snow (although he is facing other terrifying things).  We have yet to see Rickon this season though.

6.  The night is dark – We visit Stannis in this week’s episode who appears to still be allowing people to be burned to death in the name of the Lord of Light.  What I find most shocking is his wife’s complete devotion to her new faith, to the point where she appears to view her daughter as just another sinful non-believer.  I really hope nothing bad happens to that little girl.  Oh wait, what am I saying, it’s Game of Thrones, something bad always happens.

7.  Bronn vs. Jaime – Bronn is awesome.  Period.  I need more of these two together.

8.  Bran’s vision – Bran’s vision was quick and I haven’t gone back to rematch it, but it seemed like the most significant part was the image of a dragon flying over Kings Landing, no?

Ok, that’s all I have time for this week.  What did y’all think?