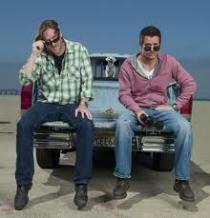 On Monday afternoon, Donal Logue did an AMA on reddit where he was as he always is. Funny, charming, self-depricating and incredibly gracious to his fans and the people he has worked with over the years. Obviously, redditors being the clever beings they are, mostly peppered Mr. Logue with the same questions over and over again, namely, “is Terriers ever going to come back?” His response gave hope to many of us who so adore this critically beloved, but short lived show:

I make no secret of the fact that I’m a Terriers freak. I know a few people who have watched it in the years since it aired on FX, but I was an early adopter. I watched it live and tried to convince people of how amazing this little show was, but no one would listen. I went so far as to even name my 2010 best of TV list the “Terriers Memorial List,” (one of the various times I happened to be irregularly blogging).

Terriers is without a doubt my favorite one season wonder show (even more than Firefly, which is second on that list), and further, it’s simply one of my favorite shows of all time. It doesn’t get the discussion and recognition it deserves because it is only one season (13 episodes), but if we were to just discuss best seasons of television, instead of best series, season 1 of Terriers would be in the same discussion as season 1 of the Sopranos, season 2 of The West Wing, season 4 of The Wire, season 1 of LOST, season 4 or 5 of Mad Men, or season 4 of Breaking Bad (among others I’m sure).

It’s story telling in it’s most beautiful form. There’s nothing necessarily special about it, except that it’s executed better than most shows or showrunners can dream of doing. It’s not showy, it’s not particuarly exciting or tense. It’s just a well told story about people who you actually care about, and, isn’t that what we should want out of long form story telling anyway?